Congratulations to our Students of the Year

West Highland College UHI is delighted to announce its Student of the Year winners. Congratulations Alexandra Mckeown and Eddie Mowles. 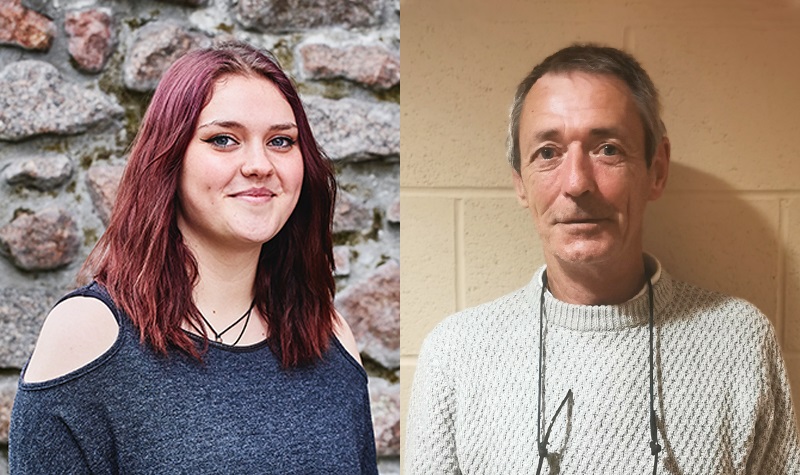 HNC Social Services student Alexandra Mckeown, aged 20, from Fort William has been described by her lecturer as always going the extra mile in her studies.

Andy Gibb, Lecturer on HNC Social Services said “Alexandra has been an extremely conscientious student and every one of her many assessment was always well thought out, constructive and always submitted ahead of deadlines. However, over and above this, Alexandra regularly goes “the extra mile”, she made time for her peers when they were looking for advice and regularly shared her experiences to “paint a picture” of certain situations to students who may not have experienced these. She constantly used her class based theory to inform her work based practice and vice versa and, whilst being one of the youngest members of her cohort, showed great maturity in making the progress she needed as the year went on.”

Lockdown brought with it the additional pressures of studying independently from home after having worked in a class environment, but Alexandra quickly adapted to the new style of studying, guided by lecturers who were well versed in this type of course delivery and found that.. “at first it was a little strange, getting used to classes online rather than being able to share a classroom with my classmates, but I soon found some benefits to this way of learning; I could stay safe and at home yet still enjoy the conversations and friendships that being a part of a classroom brought for me and I found it brought back some routine and familiarity during such uncertain and stressful times.”

At the start of the course, Alexandra was extremely anxious at the thought of speaking in front of a large group but her confidence and ability grew as the year went on so much so that she became a strong advocate for a number of issues in relation to students rights and provided both friendship and support to the class representative of the Highlands and Islands Students’ Association (HISA) in order to activity promote the college experience to others. By he end of her course, her lecturers described Alexandra as a very active contributor to all class-based discussions both verbally and in writing, extremely respectful and understanding to her classmates and showed considerable empathy to all her peers when required.

Alexandra came to this course having previously completed a lower level qualification in Hospitality. This was a massive subject change and came with relatively little working knowledge of the subject matter but Alexandra coped extremely well with this and adapted in a very mature way to this new career path.

Her placement was within the West Highland College Supported Learning department where she created a fantastic reputation for herself with both staff and students when supporting individuals with complex additional support needs.  One of the course lecturers, Nikki MacKinnon, said "Alex would be a welcome addition to any care situation, her enthusiasm and compassion shine through in every activity undertaken.   Her contribution within my classroom encouraged student to work with technologies they once thought they were not suited to, she reinforced their achievements and supported them to create interesting digital images.”

Alexandra commented on her award; “I’ve always had an interest in social and care work. Coming to college was a positive step for me, I had no idea how different learning in college would be. I really enjoyed the course and was excited about learning and coming in each day. I learned about things I was really intrigued by and I would take it home and I think about it and want to find out more. Everyone in class is the same. For work placement, I’ve been supporting adults with additional support needs. I found that everything I had been learning in class was relevant and how important all the background knowledge I had covered was when putting it into practice. My qualification has helped me to start working as a Support Worker within Key Community Support. I’m currently training to work with adults who have a variety of additional support needs, supporting them in their own homes. I feel that I am now enjoying building a career, I have made many life-long friends and I am really looking forward to my future.”

Andy Gibb summed up by saying “Alexandra is a very determined individual who fought through issues with anxiety and confidence to achieve to a very high standard.”

A mature student who came back into education after 40 years has been announced as the Overall Further Education Student of the Year for West Highland College UHI.

Eddie Mowles was 56 and had been unemployed for 16 years when he started his learning journey with West Highland College UHI in 2018 by attending a weekly job club drop-in at the Leven Centre in Kinlochleven on a Friday morning. His goal was to improve his life and his chances of getting a good and well-paid job; in his own words “he was sick and tired of living the way he was.”

Mairi Penny, Employment and Development Team Leader at West Highland College UHI, said: “Eddie took a long time to come out of his shell. He was angry at life. He’d found himself in a lifestyle that he didn’t like anymore. There was a lot of time spent building a relationship and mutual trust. The one thing I could rely on was that he would be at the job club for 10am on the dot without fail every week. He engaged well with the team and he looked forward to the social and mentoring support available to him.”

What then started off as small steps developed into a real goal, Eddie would talk about an “ideal” job and it was always something outdoors (he loves his fishing) and we discussed the prospect of some training or college courses. After a few unsuccessful job applications he came to the drop-in and said he had decided the Maritime and Aquaculture Skills course based in Mallaig was for him. This was a huge step for Eddie having no previous relevant experience or qualifications, but he demonstrated tremendous determination and used his college experience to turn his life around completely.

The staff in the West Highland College UHI’s Marine Training centre, worked hand in hand with the employability team, to get him back into a classroom. He was very nervous about using a computer and terrified of more able students in a classroom environment. When he came to us, he had very low self-esteem and his confidence and motivation were at their lowest ebb.

Even getting there on the first day was the challenge, this involved a 22-mile drive followed by a 2-hour train journey, each way.  Eddie never looked back and attended 3 days per week. He never missed a class. As time went on his negative attitude began to change, he began to take better care of himself and his appearance. But even more impressively he adapted to the classroom environment and when presented with challenges he found difficult, he rose to them. He found out that he had skills the rest of the class did not have and he thrived in helping younger students with their difficulties.

He had to learn IT skills from scratch and found this a challenge to begin with and even thought on day one that he would only last on the course a week. But he quickly found that the course gave him a new purpose and direction. He said; ”It was interesting, I loved every minute. I even loved the journey and would look forward to going to Mallaig.” Eddie is now not only using a computer, he has a mobile phone and has learnt how to use social media, which he had never done before.

And not only did he gain new skills, he also became a positive role model and setting a good example to his younger classmates, even when he was apprehensive himself about returning to an educational setting.

In class, Eddie would quietly work away, slower than the younger students who Eddie described as “wee meerkats”.  He would keep younger students in check, ask them to settle down and focus on work.  He got them involved in helping him to use a computer which helped develop an ethos of team working. As Eddie was very open about the things that he needed to learn or needed help on, this inspired other students to become more confident about asking for help. His work ethic attitude of regular attendance, good communication, involving others and getting the work done before the tea break, rubbed off on the younger students.

At the end of the year he successfully achieved the Maritime and Aquaculture Skills course. He successfully applied for a short contract to gain valuable work experience in the aquaculture industry and now that he has a zest for learning, he has decided to return to the supportive environment of college in Mallaig to study the NC Shipping and Operations at Level 6 and see just how far he can push himself.

Shaun Escott, Course Leader said: “Eddie had applied to several local fish farms unsuccessfully before this course and was feeling he was going no-where. He could not see a way forward and - in his words not mine - he had nothing to get up for each day.  At his final review he only had one thing to say “I came here a rogue and I am leaving a gentleman.”

Shaun continued: “We are all very proud of Eddie and he is testament that our courses can be life-changing no matter what age you are or what your previous experience has been – all you need to do is give it a go – and we’ll be with you every step of the way.”

Centre Manager and RYA Principal in Mallaig, Jane Henderson: “Eddie more than deserves this award and all the success that will undoubtedly come his way in the future. He has worked hard from the outset to prove to himself, his lecturers and his future employers that he has the motivation and skills they look for in an employee.

Here in Mallaig we are very proud of Eddie and all he has achieved. We are also proud that for the second year running a Maritime Skills student has achieved student of the year in West Highland College UHI.”

Course Students of the Year

We want also to give a special congratulations to our Course Students of the Year 2020! Students across all of our course areas are eligible to be nominated for these awards, which recognise skill and dedication in the students' respective disciplines.
This year raised an immense challenge to everyone in adapting to new and changing circumstances; in spite of these challenges coming during their final months of study, our Class of 2020 students have been an exceptional cohort.
View the full Course Students of the Year Awards list