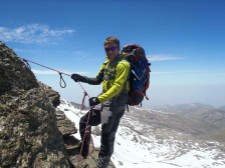 A student who has worked hard to overcome the challenges associated with dyslexia has been named as West Highland College UHI Student of Year.

Alastair Buchannan, a 22 year old from Castle Douglas in Dumfries and Galloway, joined the college’s Fort William campus in 2009 to undertake a HNC in Adventure Tourism. Staff described him as a motivated learner but, after spotting tell-tale characteristics in his work, recommended he should be tested for the learning difficulty dyslexia.

On discovering he was severely affected by the condition, Alastair did not let the news dishearten him and has never complained since. Tutors have praised his determination to overcome the difficulties he faces, which they say is evident in the steady improvement of his work.

Alastair is now about to enter his final year of an honours degree in Adventure Tourism Management at the college, which is part of the University of the Highlands and Islands.

Explaining why Alastair was selected for the award, adventure tourism management programme leader Matt Groves said: “Alastair began his studies on an HNC when he was unaware of his dyslexia. Once he was tested, he was surprised to find he was diagnosed very highly with the condition, while also having a high IQ.

“Alastair has progressed steadily since then, engaging well with the demands of academic work and working hard to overcome and find coping strategies for his difficulties. Now entering his honours year, his progress is clear. He demonstrates strong academic skills and engages with critical thinking and independent research. This has all been achieved despite a significant learning difficulty which he responded to without complaint.”

West Highland College UHI principal Lydia Rohmer added: “We are very proud of all of our students who achieve great results, but particularly of Alastair who has shown great commitment to his studies throughout his course. I would also like to pay tribute to a dedicated staff team who ensure that West Highland College UHI provides truly individual and supported learning experiences - maximising the potential of each and every one of our students whatever and wherever they are studying in any of our college centres in the West Highlands.”

Speaking about his award Alastair said: “I have found the Adventure Tourism Management degree both interesting and challenging. The journey since being diagnosed with dyslexia has enabled me to reach my full potential and this could not have been achieved without the commitment and dedication of the tutors on my course. I never saw myself getting this far at university so winning this award was both a surprise and a boost to my confidence.”